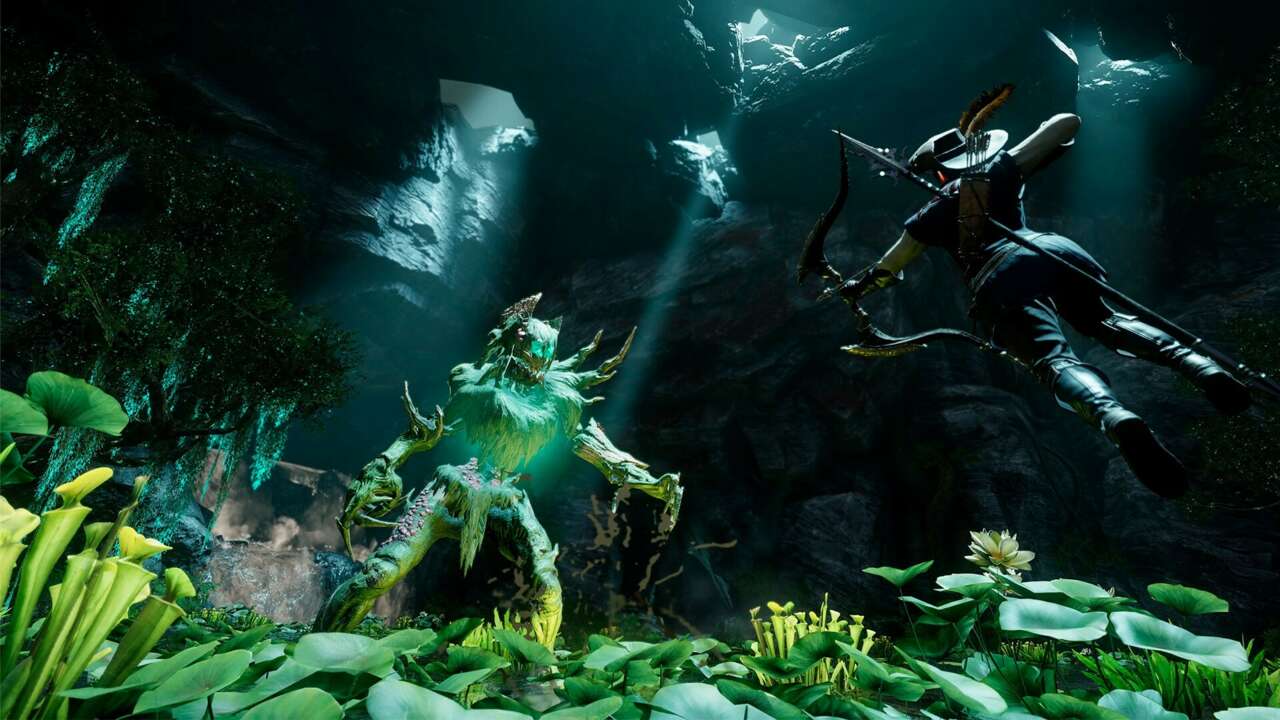 The first patch for Amazon’s MMO is here, bringing a number of bug fixes and quality-of-life changes alongside extended server maintenance.

New World Update 1.0.3 will release at 10PM PT (5AM UTC) on October 19. Please see below for the full server transfer rollout plan.

With this update we have laid the final groundwork for the server transfer feature. We’ve also included a swathe of bug fixes — thanks to all those who helped us track down these issues through their reports on the official New World forums. Before we dive into the details on exactly how the server transfer system works, our plan to roll it out to all regions, and our list of bug fixes, we wanted to thank everyone who has supported New World in our first few weeks after launch.

To show our appreciation for your patience, we are granting all players “The Stoic” in-game title. This title is meant to thank all those who, as the title description states, showed solid resolve in the face of epic wait times. The title will be automatically granted to your character, and can be equipped by navigating to the Character menu, selecting the “Bio” tab, and selecting “Change” in the title section of the screen. It may take up to a day for “The Stoic” title to appear in the list of available titles.

We’ve also added the “Waiting” emote to the in-game store— for free— as an additional thank you. To claim the emote, navigate to the in-game store and select the “Emotes” tab, where you’ll find the “Waiting” emote available for free. Emotes are account bound, so you’ll only need to claim it once on your Steam account, even if you have two characters.

GENERAL
Implemented final pieces of the server transfer framework.
Added improvements to the World selection UI.
Added clearer messaging when a player is kicked due to going AFK or violating the EAC.
Added clearer messaging when stacked discounts are present, such as territory standing and faction discounts on property taxes.
Implemented back-end changes to help our team investigate concerns around the client performance in War.
Adjusted the respawn timer on Boatswain Ambrose and various other elite enemies throughout the world.
In The Depths, Players must now be in the arena to damage Thorpe.
An error message now appears when players attempt to buy their own items in the Trading Post.
Reverted a chest/loot change from update 1.0.2 that was causing too many refining reagents to roll from chests.
Adjusted the volume on the Amazon Games splash screen.
Armor is limited to 1 skill perk per piece.
Added general performance improvements for visual artifacts and graphics settings.
Dyes are now removed from items upon trade with a warning message present.
The Time to Declare War” timer now visually pauses to make it clear when an Invasion is imminent but not yet scheduled. Territory remains in a Conflict state after Invasions, and War can be declared.
BUG FIXES
GENERAL BUG FIXES
Fixed issues with the T4 and T5 azoth staffs— go close those high level portals!
Fixed an issue causing the abandoning event notification to persist.
Fixed a housing UI issue. The UI will now correctly shows that property taxes are subject to the full price of the home, and not impacted by the first time home buyer discount.
Fixed issues with early game spawning. The watchtower respawn point is replaced by the Settlement after it has been discovered. Players no longer incorrectly respawn at a Watchtower after selecting to respawn at a Settlement.
Fixed various localization issues throughout the game.
Fixed an issue where not all items for Town Projects were consumed when completing the mission.
Resolved login errors that prevented players from accessing their character.
Fixed an issue that caused Arena keys to not drop as intended.
Fixed an issue that caused the Runic Bear armor to not be appropriately dyed during Wars.
Fixed a pet placement issue. Pets placed in an otherwise empty house now remain in the home after the player logs out, instead of returning the pet to the player’s inventory.
AP Southeast servers now display the correct time zone in-game.
Fixed an issue with titles – player titles and achievements now appear as intended, and the achievement tab properly updates when a new achievement is earned.
Fixed an issue that caused Company invites to persist after decline/accept.
Fixed an issue that caused Rajah spawns to stack forever – one big cat at a time, please!
SPECULATIVE FIXES
The fixes listed below are tentative fixes and mitigations. Our goal is to get these changes out and see if issues persist, so we can continue to work on them and address in a future update if necessary.

Thank you for your support! We’ll see you in Aeternum.